Come on, ye lads and lasses;

Come on ye civic host,
Let’s form ourselves in masses
And lay low Murray’s Ghost,
Let’s catch this weird specter,
With hideous grin and yawn,
That no longer he may hector
In the midnight and the dawn.

Tho’ the quest may be hair-raising
To lay it by its heels.
Let’s do our ghastly blazing
And hear the old ghost’s squeals.
Let’s do it with a big grit,
Let’s do it in a hurry,
That we may see the ghost flit
From the house of Messrs. Murray.

These lines appeared in The Cumberland Argus and Fruitgrowers Advocate, November 19, 1926.1 The author would have us believe they were recited by an assembled throng… I suppose it’s possible. But it does seem there was enough interest for citizens young and old to turn out of an evening – looking for an apparition in an upper window of the Murray Brothers building. To imagine them there, on the corner of Church and Macquarie Streets ninety odd years ago, is to sense the space between that time and ours.2
No one convincingly identified the figure, and the whole episode was quickly granted a natural explanation involving glass and reflections. Perhaps too quickly. Beside all those tales of the supernatural that gain acceptance in receptive minds, is there another collection out of favour due to certain deficiencies – the lack of a recognisable figure, the absence of an affecting story?
Searching through the local papers for accounts of the otherworldly, I found a letter to the editor from 1924 concerning a haunting in Wentworthville. Harking back to his youth in the 1860s, the writer recalls embarking on a nocturnal adventure with his brother:

The moon was at the full. The sky–cloudless. The place around the haunted houses was alive with curlews. Had I brought my gun with me, I should have had fine sport. There are no curlews thereabout now … The ringtailed opossum was much in evidence. So active, so nimble were these little creatures that, in watching their antics, we both had neglected the progress of time. Looking at my watch it pointed to seven minutes to twelve-the witching hour. We now hastened to the haunted houses.3

Sadly, this moment of heightened anticipation is the high point. The story quickly boils down to the residence of an owl in a derelict building. The writer explains that his age is now firmly against the idea of ghosts:

Most persons, at the time of which I write, believed in ghosts, hardly anyone believes in them now. This human life has got to be too practical for such belief. Most present day people are, whether church-goers or not, agnostics. Their daily conduct proclaims them such. They believe in hardly anything but what is to them palpable, and patent to the senses.4

By the 1920s, there is a mixed tone of disregard, humour and nostalgia in these accounts. As if the capacity for belief in ghosts had been substantially eroded by the dictates of reason. One of the last great tales of the supernatural, The Turn of the Screw (1898), balances our inclinations delicately between credulity and a newly found analytic suspicion of exceptions to nature. It seems that there was only a brief window when Parramatta could have generated a ghost, just as there was a specific period when it had bushrangers.

We must go further back. The Cumberland Argus and Fruitgrowers Advocate reported in its pages in 1926, a tale from the early years of the colony, of a Lieutenant Eustace Darnley. Making his way home from Parramatta in the dead of night, the sudden apparition was appropriately ghastly, dangling in bright moon beams from a known hanging tree, dancing and gesticulating in a “horribly devilish manner”. The sole witness, Darnley himself, had just absorbed a particularly good Christmas Eve dinner with “Sir John’s” excellent wine. He was found Christmas morning, asleep on the verge of the Western Road from Sydney, beneath the bleached bough of the tree.5

Beside that category of spirits with a tale to tell, there is another quieter sort. A popular modern illustration is the film The Sixth Sense. These apparitions seem not to be aware of – or not able to make peace with – their own death. They may be seen continuing quietly in the paths of their life. Going about their business. Peaceable ghosts who have nothing in particular to impart. Doug Brewer worked at the Parramatta Telephone Exchange for most of his time on earth.6 A cheerful figure, and – if his legend is to be believed – without peer at tracing line faults. One night years after Doug’s death, two colleagues, Bob Palmer and Russell Scanlon, were leaving the exchange when Bob realised he had forgotten something and went back to collect it. When he re-emerged a few minutes later he was extremely upset and told Russell that there was a strange figure working at the test desk. Both men went back in to investigate but saw nothing. The next day Bob was asked to describe in more detail the figure he had seen, and the details he gave surprised the Exchange staff. The man he had seen in the deserted building, and whom he was able to describe by various distinctive elements of dress and habit, could reasonably have been no other than the departed Doug who had died years before Bob had come to Parramatta to work.7

It is easy to be dismissive in the face of a tale defying the strongest natural laws, and where other explanations may always be easily found. But it is hard to deny there must have been much experience of the supernatural amongst a population transplanted from green familiar lands to a harsh new environment, overwhelmed by the unknown. How many possums in the dead of night were taken for departed husbands or wives, lost children? 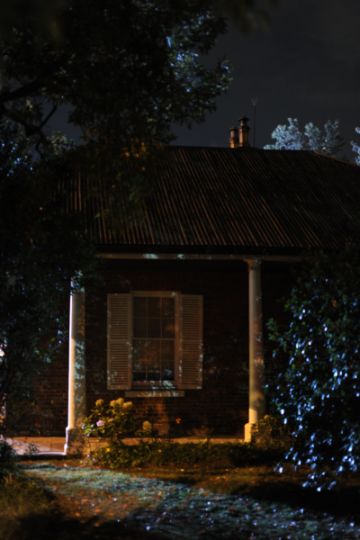 Frequently it is by the precision of detail around its apparition, rather than its identity, that a ghost is known. Janet Templeton, widow of a Scottish banker, migrated to Australia in 1829 with her ten children. She had Roseneath Cottage built in 1837, and lived there happily for a few years. Then her eldest, Margaret, died. Soon after, economic depression sent her bankrupt. The ghost observed in Roseneath for the greater part of two centuries may be Margaret. Or it may be Janet. But it is always dressed in grey satin, usually appears at 3 in the morning, and is said to bear an inquiring expression. It has been known to whistle.8

I think it is unlikely that the entire appeal of ghost stories derives from our fascination with an unknown realm beyond death. I believe that so many things that people cherish – relationships, hopes, memories and achievements – are eventually lost forever. Ghosts represent a holding place where human experience resides forever. All it takes is an open mind, a sympathy, for it all to be brought to life again.